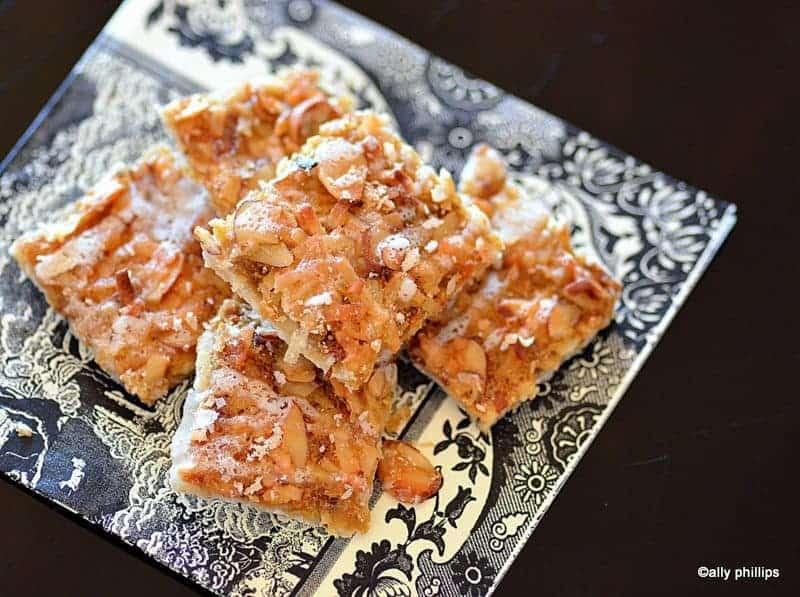 History is preserved and expressed in food and recipes. Ingredients and recipes have a beginning…somewhere in history. And, that’s the story behind this recipe.

Miss Briggs was one of my three sons’ favorite teachers in high school. She is a kind and gentle soul, now retired after being a cracker jack old-fashioned teacher of foreign languages. Miss Briggs wasn’t married. Her life was devoted to the thousands of students she taught over a stellar career. We remain friends on Facebook although she’s moved from where she taught.

So, Miss Briggs contacted me via FB saying that she had a couple of old family recipes. Since she didn’t cook, she didn’t want them to ‘die’ or be forgotten. She asked if I’d like to have them. Of course, I was ecstatic. First of all, honored that she would entrust me with recipes from her legacy, her grandmother and mother. Of course, I said ‘Not just yes, but hell yes!’ I love vintage recipes and feel that part of my role with this website is to be the keeper of food history.

Miss Briggs said she’d mail them to me. Yes, snail mail. I asked her to write a background on the recipes, too, so I’d know more about the legacy. When I opened the envelope not 4 to 5 days later, there was a handwritten letter and the original recipe cards! OMG! I was stunned. Miss Briggs had handed over to me something as precious as the U.S. Constitution! One was a 3×5 index card, worn, tattered, stained and yellowed from decades of use. The other was a fold over ‘recipe card’ with a cute little tea pot and teacup on it. The kind of recipe cards that you could buy in the 5 & dime in the 1950s and 1960s. Like the index card, it was handwritten in cursive and evidence of use made it even the more treasured.

Miss Briggs wrote the history behind the ‘pie crust cookies’ (and the other recipe, which I’ll eventually do, too). Rather than compromise wording, I am quoting her exactly:

“My father worked as office manager at the Watts Plant, A.P. Stevens Textiles, in Laurens, SC where I grew up. The mill owned a community house that groups used for social occasions. The hostess at the house was Miss Betty. The cook was Gina. Miss Betty had this secret cookie recipe. which she said HAD to be kept secret until she died. I LOVED these cookies, and Gina would send me some whenever she made them. No matter how much my mother begged, Miss Betty would not share her recipe. Eventually, Gina sneaked the recipe to my mother. Not wanting to get Gina in trouble, Mother kept the recipe to herself until Gina retired. We delighted in knowing we were eating these ‘secret’ cookies. As you can see, the recipe card has been well used. We had them every Christmas as long as Mother could cook.”

Reading this, I was almost in tears. I could just imagine in my mind’s eye the old community house, holidays in the mill town, the scents of evergreens, twinkling tree lights, holiday music,  Miss Betty the ‘hostess with the mostesss’ flitting around and welcoming everyone in her slow Southern drawl and Miss Gina the amazing proud ‘chef’ in charge of functions and making folks happy with her food.

Yes, there were ‘gaps’ in the recipe particularly on the directions. So at first, I used chopped walnuts in the recipe (no particular nut was noted) and rolled up the pie crust making ‘pin wheel’ cookies. On my second batch, I used sliced almonds and left the crust as is, like a pizza crust, and cut the cookies into squares. You decide what you want to do. I like the latter technique.

As I say in my cookbook trailer, ‘Cooking is so much more than just standing in front of stove.’ It’s a communal expression of love and a dining experience.

And, here’s another recipe from my family that has a rich legacy and history. You don’t want to miss it! 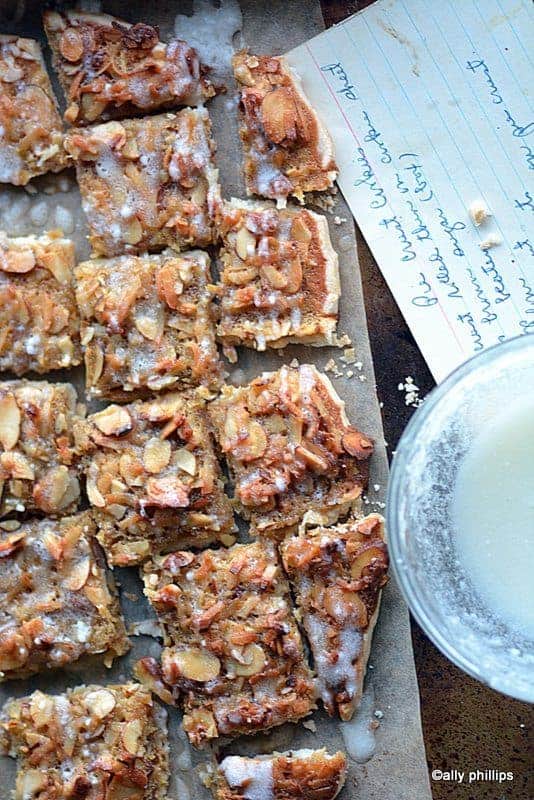 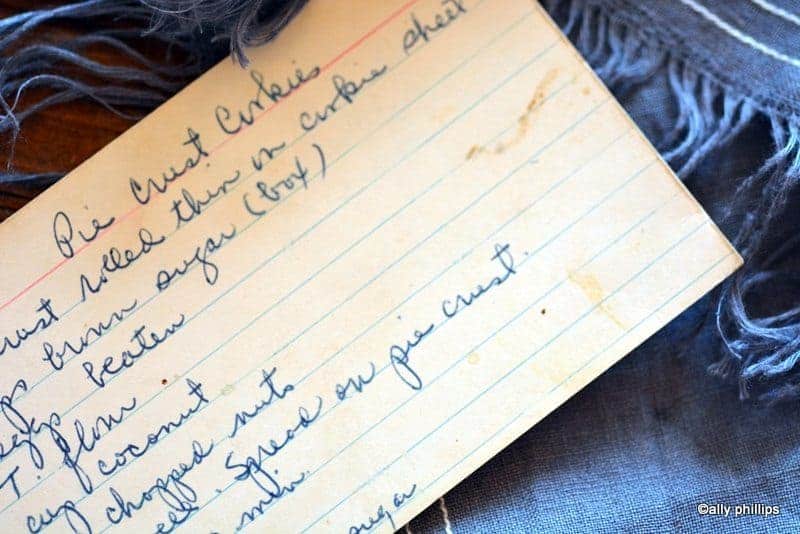 The number of cookies will be determined by the size that you cut them.

You can roll up the pie crust then cut into pin wheel cookies. Leave more room around the perimeter (about 3/4") and on the end (about 2" across the pie crust) that will be the final seam when rolling, don't put filling in.

Slice into rounds. Bake about the same amount of time. 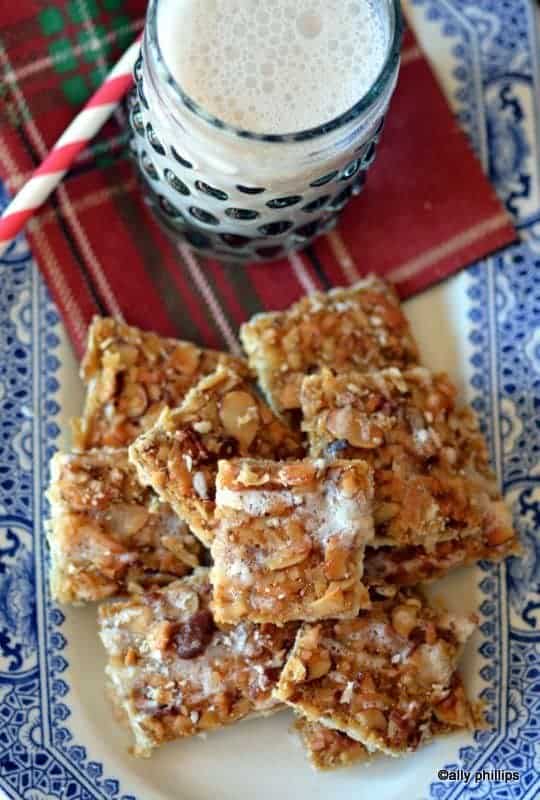