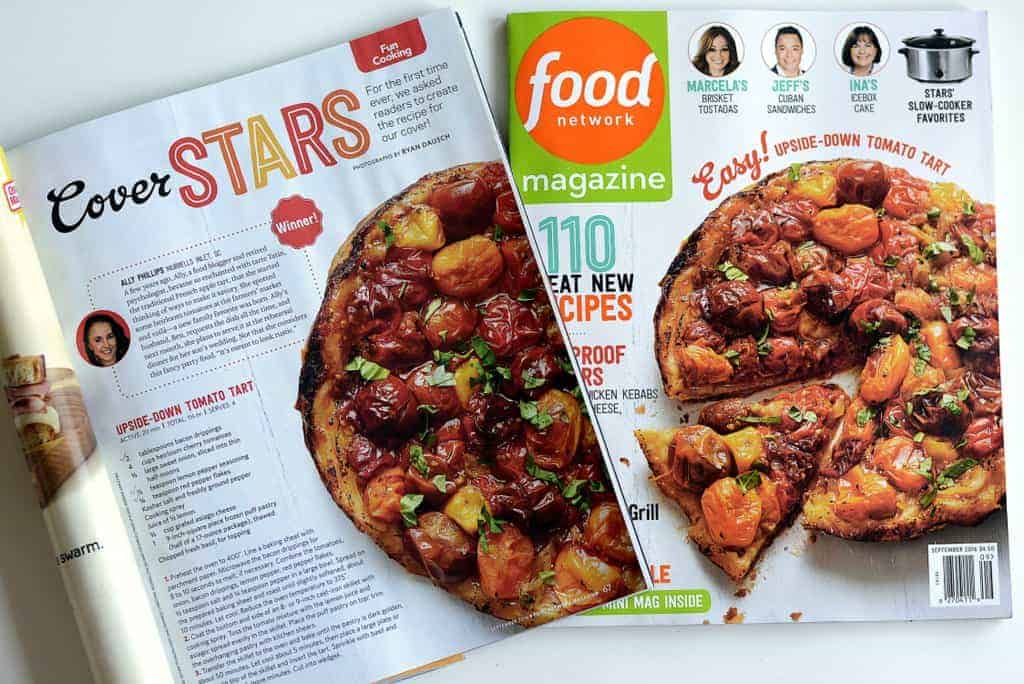 My recipe for upside-down tomato tart graced the cover of Food Network magazine. Yes, this recipe was tested in the FN kitchen and it is award-winning!

A tarte Tatin is basically an upside-down pastry.  According to ‘history’, maybe folklore, two sisters ran the Hotel Tatin in Lamotte-Beuvron, France.

Well, it was supposedly a hit with guests, and the rest is history. The ‘tarte tatin’ became a baking ‘technique’ that purportedly had been done even earlier some 40 years prior by another patissier by the name of M. A. Carême. Regardless of the clarity of this history, it’s fact that the Hotel Tatin made the sisters’ dish the ‘signature’ hotel dish.

Usually, a tart tatin is done with fruit, but I wanted to use this French technique that was ‘discovered’ quite by accident, with something savory. Yes a savory tart tatin.

Some behind the scenes storytelling always makes for good reading. When I’m in my recipe creation frame of mind, there are lots of things that I consider when coming up with delicious recipes. First of all, is taste, is it something that just flat out tastes good?

Another is ease of preparation. In today’s busy lives of families, Millenials, GenX’rs and even retirees, you want to do ‘home’ cooking but you don’t want to be chained to the kitchen. So quick and uncomplicated makes for the most popular and doable recipes.

Certainly, THE last thing I want to do is scare you off with a recipe that looks like you need to be a culinary school graduate to do it! Other considerations are can you find the ingredients. I mean we all don’t have Trader Joes, Whole Foods, gourmet shops, grocers, bakeries, meat shops, farmers markets, fish and cheese mongers right around the corner.

And, along this same line of thinking, I want the ingredients to be affordable for a tomato tart recipe.

Cozy meals are the best! And, I’m thinking you might want to serve a protein with this tomato tart. Let’s start with some chicken ideas.

If you’re not into a chicken dinner dish, then let’s look at some pork ideas.

Tomatoes are beautiful. And, I know that tomato tarts are stand out beauties. So, of course, as I’m creating recipes, I think about how gorgeous is this recipe going to ‘look’ as in plating when I serve it.

I believe in #prettyeating makes for even more scrumptious food. Finally, but probably not lastly, I want the end product to have a uniqueness to it. I want you to learn something new about cooking, maybe even the history of food. This heirloom tomato onion tarte tatin, or as Food Network renamed it, upside down tomato tart, was conceived with these ideas in mind.

If you Google ‘upside down tomato tart’, what do you get? Well, just humor me. Go ahead and try it. I suppose this is one recipe that I’ve created that ranks up there because it’s on the cover of Food Network magazine!

The cherry tomato is best for the tomato tart recipe. At least I think so. That’s because cherries tomatoes, especially the heirloom variety with different colors, are simply gorgeous after they’re cooked. All the colors contrast once you’ve flipped this tart and each is showcased like a star!

Shifting now to something else about this recipe for tomato tart tatin. The behind-the-scenes, I think, is even more spectacular. Yes, this recipe is one that I entered into a contest. If you follow me and know me, I love food competitions and cooking contests. So, when I saw that Food Network magazine was looking for ideas from their readers for the cover of their Fall 2016 September magazine, I thought what more beautiful to grace the cover of this insanely popular magazine than this stunning heirloom tomato onion tarte tatin! Food Network had never invited readers to be ‘cover stars’ and I jumped at the chance to throw my idea into the ring.

From there, I went about creating a new recipe, a twist on something unique like the tarte tatin using savory flair. I adhered to all the aforementioned points about what I consider in recipe development. And, this delicious recipe was born! Sometimes when you enter contests, you just have a ‘feeling’ and I had that ‘feeling’ after I photographed this recipe. Then when I had several people taste it, and, it got rave reviews, well, I just felt even more confident that this could be a winner. Amazingly, it was!! 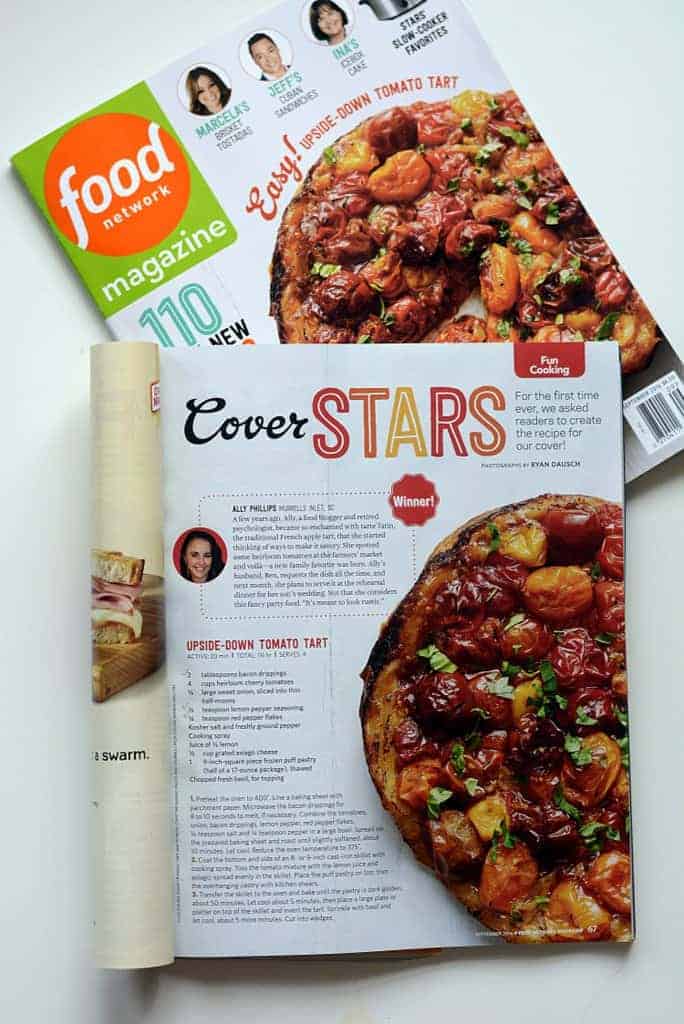 When I got my magazine, I was traveling, and on a flight connection, I walked into a couple of airport shops. I mean talk about the exhilaration I felt when I looked at the rack of magazines, lots of cooking magazines, and here I see Food Network with my recipe gracing the cover! Yes, a ‘cover star’ is born! Yes, from tomatoes! And, I couldn’t have been more thrilled and exhilarated. I wanted to go out into the crowded busy terminal, throw my arms in the air, shout at the top of my lungs, ‘Yes!! I’m a cover star!!’

Reading Maile Carpenter’s Editor’s Letter was even more spine tingling. As a food magazine editor, she wrote about this being the first time ever that FN had considered using a reader’s recipe idea for the cover. She described the many entries and the grueling due diligence that was done with the top ten, then down to the top four, then the final decision after mocking up magazine covers with the four finalists.

Looking at the three runners up just makes my head swim. Yes, we were all Food Network inspirations. Recipes and photos that could grace any magazine cover, yes, they were that stunning, sexxxy, and spectacular! Finally, a group of magazine executives, including Maile’s own boss, Ellen Levine, made the decision. They believed the tomato tart was a “real winner”!

Yes, this is my story. My foodie peeps, dreams do come true. Food network kitchen recipes come from homecooks like me. Dreams have no expiration date. You just have to put yourself out there.

Take a chance. Go the edge and look at the possibilities. Don’t be afraid. Don’t let all that mindful self-doubt and self-talk hold you back. You just might find huge surprises awaiting you if you only take that step into the unknown. Thanks for listening to all my chatter. Here’s my recipe. Pick up a copy of the magazine and see what might have been tweaked or changed in the recipe from their professional chefs in the Food Network kitchen. You can see my photos that I took. Then the magazine has their professional photographer’s photos. I thought I was seeing double! Just know that when you make this dish, it’s one cover star and it’s sure to make your tastebuds dance! 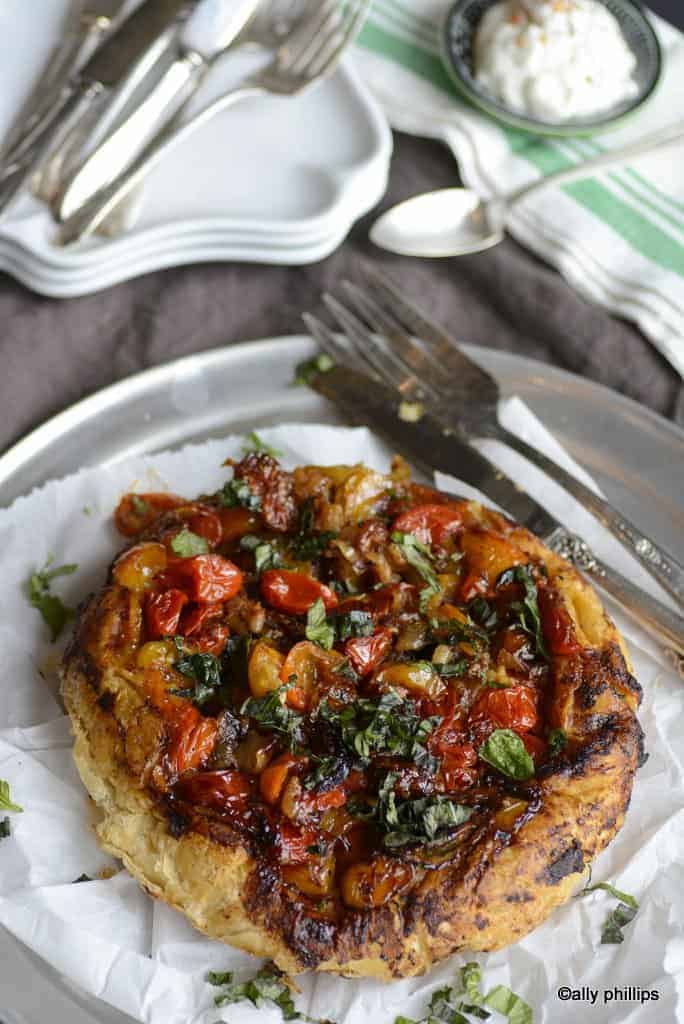 Mix together the tomato/onion mixture, lemon juice and asiago. Put in a 8-9” well-seasoned cast iron skillet coated with cooking spray (bottom and sides). Take your fingers and make about a ½” ‘moat’ around the mixture leaving room to tuck the pastry around.

Place the puff pastry sheet on top. Roll (inward into the skillet) excess pastry and tuck around the tomato/onion mixture forming a ‘dome’.

Place the skillet on a cookie sheet. Bake in a preheated 375 oven for about 35-40 minutes or flaky and golden brown. Remove and let it cool about 5 minutes.

Place a larger round plate or platter on top and flip over. Sprinkle on the fresh basil. Cool another 5-7 minutes, slice and serve with a dollop of sour cream.

Perfect for breakfast with a steamed sunny side egg on top each slice.

Can be eaten warm or room temperature. Equally as deeelish! 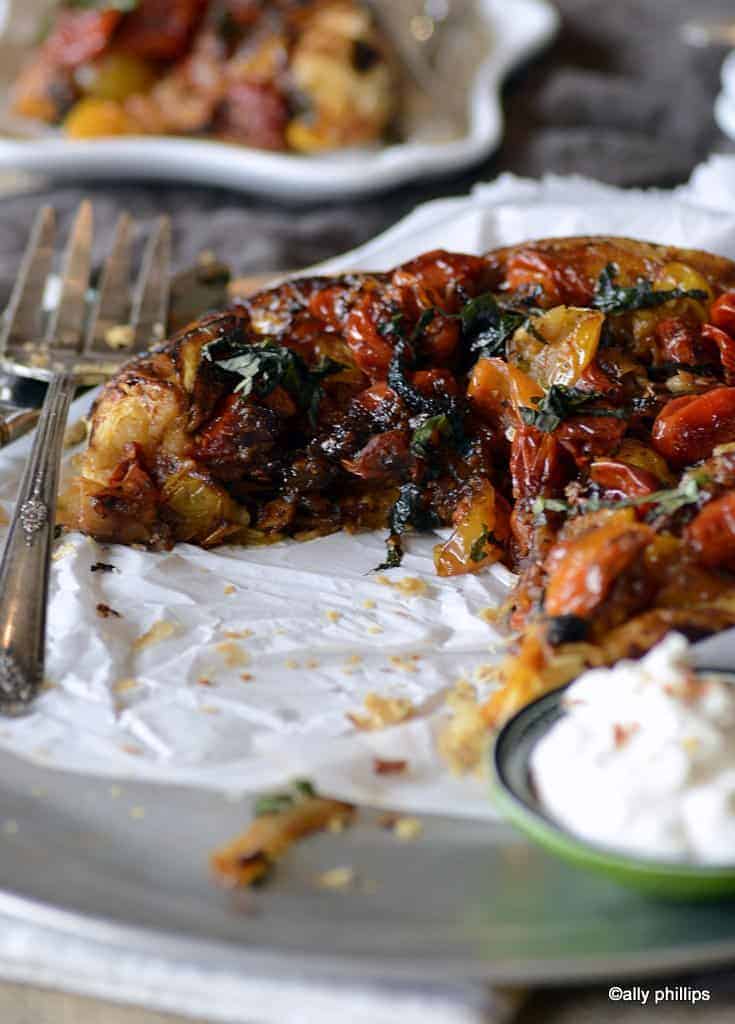